A primer to French wine

By Andre Eikmeier
about 3 years ago
5 min read

For many of us, our connection with France hasn’t expanded much further than the ability to say “voulez-vous couchez avec moi, c’est soir?” either whispered at the back of French class or shouted on a booze-fuelled Contiki tour through Paris. We’re not known for our linguistic talents, but perhaps if we were introduced to French wine in high school our attention would’ve increased tenfold.

There are two tricky parts to French wine. The first, naturellement, is pronunciation. If you have no understanding of the language it can be near-impossible to get through the full name of a vino, let alone announce it with confidence in front of the entire dinner party.

The second, more important part is actually knowing what you’re drinking. Named for their geographic origin rather than the particular grape, French wines are a little more complex than their Aussie or Kiwi siblings.

The region dictates what you’re getting, so if you’re looking to get into some chic vinos then a basic knowledge of the wine regions is key. And keep in mind, this is extremely basic. There are always exceptions, unfortunately, it’s just the way of the French. 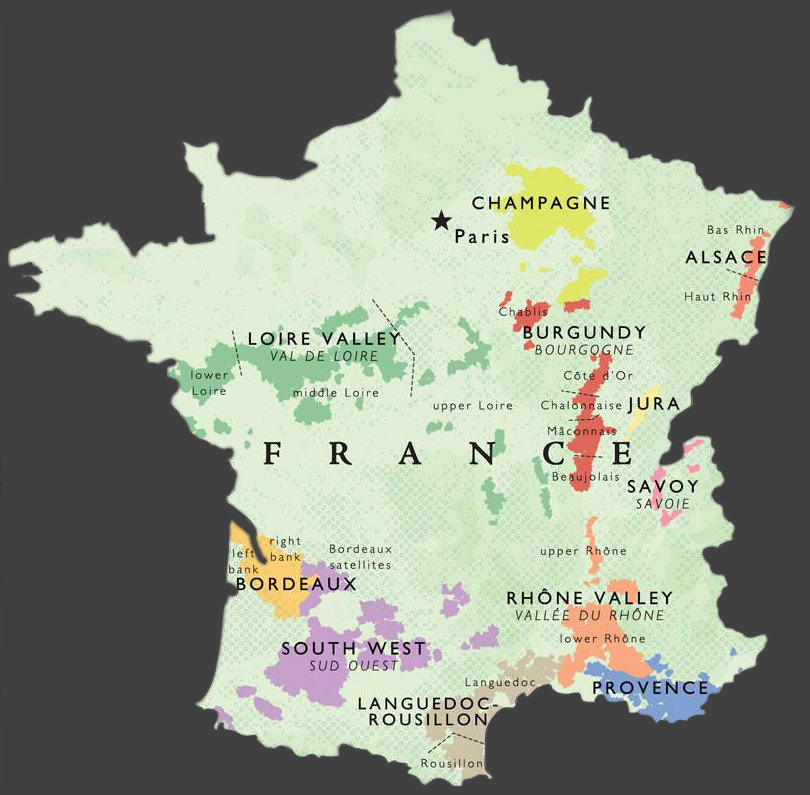 Alsace will actually usually name the varietal on their bottles. This is awkward in the context of this article, but incredibly useful in the real world. It’s a region made for white wine fiends, with riesling, gewürztraminer and pinot gris reigning supreme.

If it’s red, it’s pinot noir and if it’s white, it’s chardonnay. Burgundy is not only considered the original home of these grapes, but also the ‘terroir’ which gets the most out of the grape. ‘Terroir’, literally translating as ‘soil’, basically refers to the idea that the land and the environment in which grapes are grown impart unique qualities and characteristics on a wine. Keep an eye out for Chablis, the famous chardonnay subregion, and pinot from the Côte de Nuits – an expensive indulgence.

Beaujolais is kinda like the younger sibling of Burgundy. Free-spirited, fun-loving and made from the gamay grape, expect light, fruity red wines with flavours of strawberries and cherries that taste unreal when served slightly chilled. It’s a great region for anyone who enjoys that lighter pinot style, with the best Beaujolais resembling something close to red Burgundy.

Perhaps the most famous of French wine regions, Bordeaux is known for its heavier blends of merlot and cabernet sauvignon. The region is a complex beast, however, and there are also appellations producing sweet and dry white wines, particularly blends of savvy b and semillon. It’s split into two sides, with the Left Bank crafting cabernet-dominant wines, while wines from the Right Bank primarily consist of merlot, with many of the whites living in the the middle in a subregion called Entre-Deux-Mers (meaning in between two rivers).

Kinda speaks for itself, doesn’t it? The most famous of sparkling wines, Champagne has long been synonymous with good wine and good times. Your bottle of bubbles will generally be a combination of pinot noir, chardonnay and pinot meunier, depending on the house style. Traditional Champagne is often blended from separate vintages and vineyards, signified by an NV (non-vintage) on the bottle.

The Languedoc is to the Rhône Valley what Beaujolais is to Burgundy. Though it’s not one of the traditional French big-dogs, there are some stunning wines being made and it’s becoming known as a region producing wines of exceptional value. Once again, full-bodied blends make up the majority of reds, with syrah, grenache, mourvedre and carignan as the main grapes in the mix.

The Loire Valley is split into three primary growing areas which cover whites, reds, rosé and sparkling. The region is best known, however, for its white wines including sauvignon blanc, chenin blanc and muscadet. The Pouilly-Fumé and Sancerre subregions, both growing sauvignon blanc, are particularly highly regarded for their acidity and minerality.

Rosé, rosé, rosé. Provence is the home of pale, pink, dry, perfumed rosé and there’s nowhere more aesthetically pleasing to drink it. When the wine world thinks rosé, they think Provence every time. It’s always refreshing and utterly smashable, and if you’re after the real serious, more savoury stuff, then the Bandol subregion should be your first stop.

Rhône, sweet Rhône. Once again, red wine reigns supreme with Northern Rhône laying claim to perhaps the best syrah in the world. These are going to be a little spicier and earthier than what Aussies are used to, whereas wines from Southern Rhône are generally more gluggable, Grenache-based blends and really good value. When it comes to white wine, you’ll find viognier and marsanne, but the Rhône is a great starting place for any lover of big Aussie reds.

This is the best part. The only way to learn, really, is by drinking. You don’t need to shell out your life savings to enjoy some really decent French vino, so try as much as you can. We don’t have to ask you mofos twice, do we?